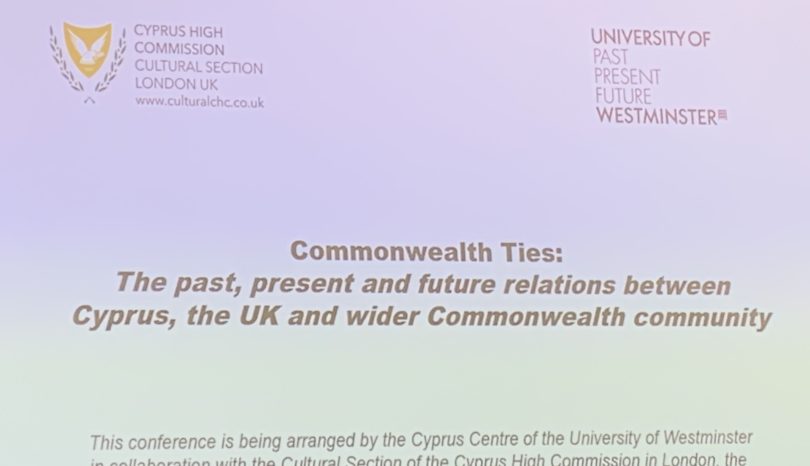 Commonwealth Ties:
the past, present and future relations between Cyprus,
the UK and wider Commonwealth community 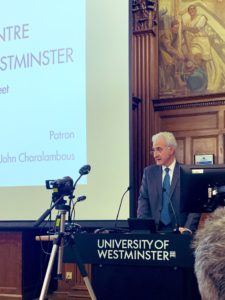 It gives me great pleasure to be with you this morning at the University of Westminster, and to be given the opportunity to say a few welcoming remarks so soon after arriving in London as the new Cyprus High Commissioner.

I would like to thank our hosts, particularly the Cyprus Centre at the University of Westminster for the initiative. Special thanks go to Dr Alicia Chrysostomou for her tireless efforts in putting together today’s conference.

I would also like to express my appreciation to the co-organisers and supporters of the conference, namely the Royal Commonwealth Society-Cyprus Branch, the School of Law at the University of Nicosia, the AG Leventis Foundation and the Cultural Section at the High Commission of Cyprus.

I am delighted to see that a number of Cypriot researchers and academics have travelled from Cyprus to present their papers, proving the continuing interest in and relevance of the Commonwealth.

It is also great to have with us today representatives from prestigious academic centres and cultural institutions for their perspectives.

Allow me to also recognise the presence and participation of Robert Holland, whose sustained focus on Cyprus over the past decades has been an invaluable contribution to Cypriot historical studies, as revealed in his publications and the many doctoral supervisions he has provided to young Cypriot researchers.

As the title of the Conference telegraphs, Cyprus attributes great importance to its “Commonwealth Ties”. As a member of the Commonwealth family since 1961, Cyprus has benefited in many ways, be it in the area of people to people contacts, trade, its legal system, education and research, to name a few.

Allow me in broad brush stokes to touch upon the relations between Cyprus, the UK and the Commonwealth in general.

Cyprus and the UK share a very strong bilateral cooperation and partnership in a plethora of areas, including Tourism, Trade, and Commerce, people to people, business and the academia. The vast majority of our legal and financial services professionals continue to be educated or trained in the UK. Of course, the vibrant Cypriot community in the UK adds an additional dimension to this relationship. Furthermore, significant developments have recently been made in the area of Transnational Education (TNE) between British and Cypriot universities.

The University of Nicosia is, in fact, leading TNE cooperation between our two countries, with established partnerships with St Georges University and the Royal Veterinary College, as well as through its membership in the Association of Commonwealth Universities, a leading network of more than 500 Universities in the Commonwealth.

As an indicator of the further expansion of our relations, I would note that Cyprus and the UK have developed cooperation in the important area of security and defence, culminating in the signing of the first ever MoU on establishing a framework for defence cooperation last April.

Clearly, Brexit has created anxiety to Cypriots living in the UK and, respectively, British citizens living in Cyprus. But, rest assured, we are in constant cooperation with our British colleagues, in order to address all relevant issues. The democratic decision of the UK to exit the EU is fully respected by the EU27 and what Cyprus argues for is the need to maintain a close and robust future relationship.

The modern Commonwealth consists of 53 member states with more countries wanting to join. This, I believe, is a clear recognition of the vitality and value added of the Commonwealth: A rich mosaic of countries from all the continents of the world, enabling both bilateral and multilateral cooperation. Not widely known outside of this room is that the Commonwealth is a vibrant, consensus driven organisation with keen interest and a growing focus on the promotion of human rights, addressing climate change and empowering the youth.

To this end, Cyprus is an active member state. Allow me to recall that former Foreign Minister Kasoulides was the Chair of the Commonwealth’s Ministerial Action Group, which is the highest body for Foreign Policy Issues. And today, Cyprus Chairs the Board of Governors of the Commonwealth, one of the main decision-making bodies, overseeing the reform process of the Commonwealth Secretariat.

The Royal Commonwealth Society-Cyprus Branch, inaugurated officially by HRH Prince Michael in Nicosia in April 2018, has further advanced Cyprus’ role in the Commonwealth, unfolding new opportunities and vistas for cooperation.

I would also like to highlight Cyprus’s initiative for establishing a partnership cooperation mechanism between the EU and the Commonwealth. We have proposed to the EU that the two organisations work together to maximise their collective input in the same way that the EU already does with the UN, OSCE, NATO and the African Union. We are keen to provide a bridge to the EU for other Commonwealth countries, be it for development assistance, humanitarian aid and disaster relief.

I would be remiss if I did not mention the important support the Commonwealth continues to offer Cyprus in our efforts to end the Turkish occupation and reunite the island and its people as demonstrated at successive CHOGM’s where all 53 member states have expressed their solidarity and support for the sovereignty, independence, territorial integrity and unity of the Republic of Cyprus.

In ending, I welcome today’s initiative and the platform offered for a productive and informed dialogue on the past, present and future of the Commonwealth.

I am confident that the participants will further our knowledge about the evolution of the Commonwealth through the years, and importantly, enhance our appreciation of the sometimes understated, but highly significant contribution of this important international organisation.

I wish every success to today’s Conference.