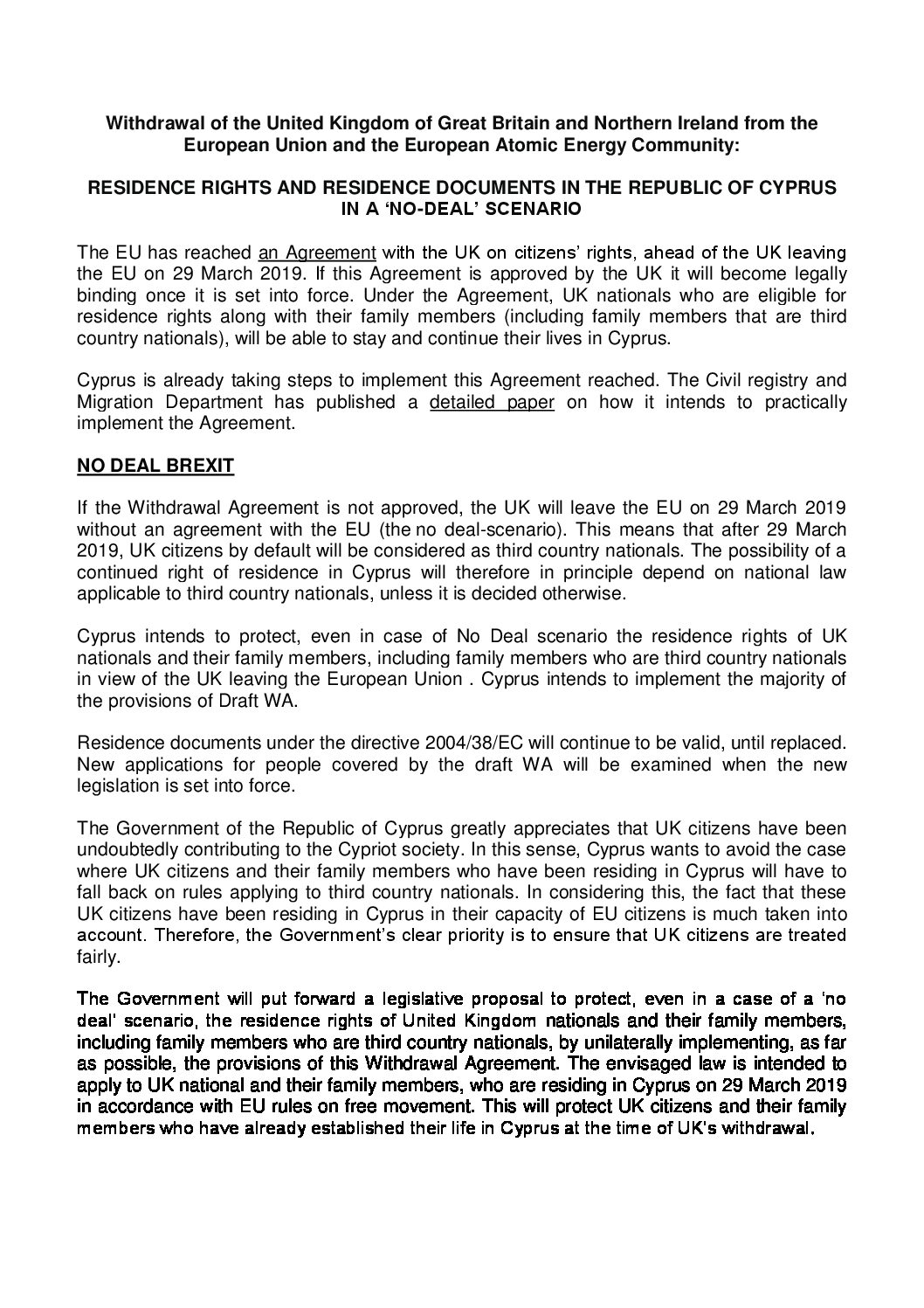 The EU has reached an Agreement with the UK on citizens’ rights, ahead of the UK leaving
the EU on 29 March 2019. If this Agreement is approved by the UK it will become legally
binding once it is set into force. Under the Agreement, UK nationals who are eligible for
residence rights along with their family members (including family members that are third
country nationals), will be able to stay and continue their lives in Cyprus.
Cyprus is already taking steps to implement this Agreement reached. The Civil registry and
Migration Department has published a detailed paper on how it intends to practically
implement the Agreement.
NO DEAL BREXIT
If the Withdrawal Agreement is not approved, the UK will leave the EU on 29 March 2019
without an agreement with the EU (the no deal-scenario). This means that after 29 March
2019, UK citizens by default will be considered as third country nationals. The possibility of a
continued right of residence in Cyprus will therefore in principle depend on national law
applicable to third country nationals, unless it is decided otherwise.
Cyprus intends to protect, even in case of No Deal scenario the residence rights of UK
nationals and their family members, including family members who are third country nationals
in view of the UK leaving the European Union . Cyprus intends to implement the majority of
the provisions of Draft WA.
Residence documents under the directive 2004/38/EC will continue to be valid, until replaced.
New applications for people covered by the draft WA will be examined when the new
legislation is set into force.
The Government of the Republic of Cyprus greatly appreciates that UK citizens have been
undoubtedly contributing to the Cypriot society. In this sense, Cyprus wants to avoid the case
where UK citizens and their family members who have been residing in Cyprus will have to
fall back on rules applying to third country nationals. In considering this, the fact that these
UK citizens have been residing in Cyprus in their capacity of EU citizens is much taken into
account. Therefore, the Government’s clear priority is to ensure that UK citizens are treated
fairly.
The Government will put forward a legislative proposal to protect, even in a case of a ‘no
deal’ scenario, the residence rights of United Kingdom nationals and their family members,
including family members who are third country nationals, by unilaterally implementing, as far
as possible, the provisions of this Withdrawal Agreement. The envisaged law is intended to
apply to UK national and their family members, who are residing in Cyprus on 29 March 2019
in accordance with EU rules on free movement. This will protect UK citizens and their family
members who have already established their life in Cyprus at the time of UK’s withdrawal.