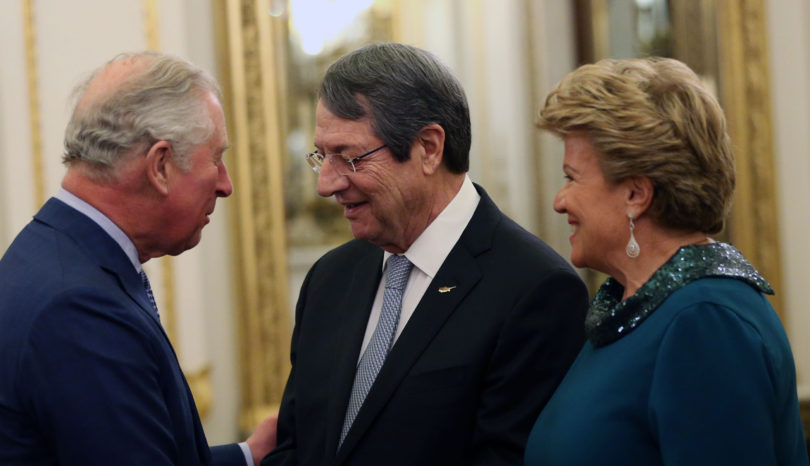 The long-lasting friendship and enduring bonds between Cyprus and the United Kingdom and their peoples were underlined last night by the President of the Republic, Mr Nicos Anastasiades, and Prince Charles of Wales during an event, organised by the Buckingham Palace, in London, to celebrate the Cypriot diaspora in the UK.

The event took place at the Buckingham Palace, where  Prince Charles welcomed the President of the Republic and his spouse, Ms Andri Anastasiades, as well as the rest of the Cypriot delegation. Present at the event were a number of distinguished Cypriots living in the UK and British officials.

Speaking at the event, the President of the Republic said «thank you Your Royal Highness for the gracious invitation extended for this special evening taking place for the first time in the Buckingham Palace, in celebration of the vibrant Cypriot diaspora community in the UK and the historic ties our countries enjoy.

From the outset, Your Royal Highness, I thank you for the warm hospitality.

I also feel obliged to pay tribute to your vision, leadership and the important humanitarian work you have advanced through Your service as Prince of Wales over these past 50 years.

Tonight’s event offers us the opportunity to celebrate the long-lasting friendship and enduring bonds between our two countries and people.

These bonds were also celebrated last year on the occasion of the centenary from the end of the First World War, during which 16 thousand Cypriots fought alongside their British brothers in arms.

This was repeated in the Second World War when more than 30 thousand Cypriots of all ethnic backgrounds, amongst others a former President of the Republic of Cyprus and my mentor, Glafcos Clerides, joined the struggle against fascism and defended our shared values on democracy and achieving lasting peace.

Our history and journey has been one of constant evolution, based on trust and numerous synergies on a wide range of issues.

The same spirit guides our co-operation within the Commonwealth, an organization which thrives due to the fact that its members, despite their diversity, share common values and ambitions.

We truly appreciate and greatly value Her Majesty’s devotion, vision and unique leadership in skillfully steering the Commonwealth for almost seven decades.

I have no doubt and I have full trust to Your Royal Highness as a passionate supporter of the Commonwealth, that, as the next Head of our family, Your leadership will be equally successful as Her Majesty’s.

Cyprus has been an active member of the Commonwealth since 1960 and I wish to assure of Cyprus’ determination to continue playing a dynamic role in implementing our joint agenda, particularly in increasingly important global challenges, such as: climate change, sustainable development, research and innovation, protection of cultural heritage and of the environment.

Our relationship extends beyond our political and diplomatic bonds. Our people-to-people ties constitute, without a doubt, the most dynamic aspect of our relations.

More than three hundred thousand Cypriots from both communities permanently live in the UK, the largest Cypriot diaspora, with the UK also being one of the most favourite academic destination to thousands of Cypriot students.

It is for this exact reason, that I am humbled to be amongst so many of my fellow Cypriots who have excelled in their new home, many of whom have received honours from Her Majesty the Queen for their services in various sectors, such as education, arts, culture, sciences and business.

At the same time, we pay tribute to the more than sixty thousand Britons permanently residing in Cyprus and their important contribution to multiculturalism in our country, as well as to the more than a million British tourists visiting our small island each year.

With these brief remarks, I would like to once more thank His Royal Highness for his generosity, his friendship and his commitment to the constant improvement of our special relationship.

Before concluding, I would like to commend our High Commissioner, Ambassador Evriviades, for his sincere devotion and constant efforts to further enhancing our bilateral relations.

Lastly, I would like to extend my sincere appreciation for having the opportunity today to provide a glimpse to the productive collaboration between Cyprus and the UK in the field of culture.

In the displays exhibited this evening, you can enjoy:

– A collection of authentic maps by Lord Kitchener – the first modern cartographer of Cyprus;

– A collection of archaeological artefacts from the British excavations of the tombs of Enkomi, some of which are displayed in the British Museum and some in Nicosia’s Museum;

– Illustrations of the scientific and research partnership between the University of Cyprus and the Imperial College London.

The above provide an undeniable evidence of the historic depth and the dynamic contemporary relationship between our two countries.

At this point and in concluding, Your Royal Highness, please allow me to extend my sincere appreciation for preserving and displaying all these years this precious Cypriot cultural heritage at the British Museum. I truly hope that one day we will be able to exhibit them in a reunited Cyprus.

Once again, Your Royal Highness, I thank you for this honour extended to Cyprus and its people.»

On his part the Prince of Wales said, among other things, that «It gives me such special pleasure to be here with all of you this evening –in particular to be able to join you, Mr President, and your lovely wife – to celebrate the remarkable contribution of Cypriots here in the UΚ as well as those who contribute so much across the Commonwealth.

This is an occasion to demonstrate everything that binds us together.»

He added that Cyprus is a crossroad of civilisations, adding that «in this country we feel the influence of Cyprus particularly keenly» noting the contribution of Cypriots both in World War I and World War II, in defence of our shared values.

Prince Charles praised the contribution of the Cypriots of diaspora in the UK who have exemplified in various fields with hard work and determination.

Prince Charles paid special tribute to President Anastasiades’s leadership on many of the global challenges that unfold and expressed respect and admiration for him.

Concluding, he expressed the gratitude of the UK for the Cypriot heritage brought to it over the years.

A music program followed by the Oxford symphonic orchestra directed by Marios Papadopoulos, and later on the President of the Republic and the Prince of Wales visited an exhibition of archaeological artefacts from Cyprus, an exhibition of old authentic maps of Cyprus, and a thematic exhibition with regard to university and academic cooperation, hosted at the Palace.