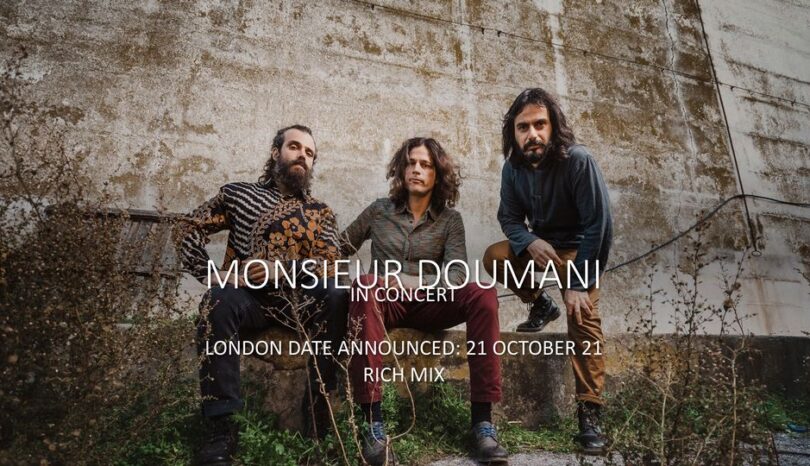 Multi-award winning Cyprus-based trio Monsieur Doumani return with a thrilling fourth album, “Pissourin”, pushing their trademark Mediterranean sonics into a deep psychedelic and avant-folk direction. A danceable fever storm of stringed instruments, multi-layered singing and trombone-driven low end. The album ‘Pissourin’ was released last September by acclaimed German label Glitterbeat Records. The band is presenting this highly praised album in the UK for the first time as well as selected music from their previous discography. Monsieur Doumani were awarded as ‘Best Group’ in the Songlines Music Awards 2019 and have received the prestigious ‘German Records Critics Awards’ as well as the ‘Critics Award’ in the Andrea Parodi World Music Awards.

Organised by Cyprus High Commission in the UK – Cultural Section

Supported by the Ministry of Education, Culture, Sports and Youth of Cyprus – Cultural Services.

PLEASE NOTE THAT AS OF MONDAY 7TH FEBRUARY 2022 WE WILL ONLY BE ACCEPTING DEBIT/CREDIT CARD TRANSACTIONS FOR ALL CONSULAR SERVICES.

We are proud to release a joint statement by #DiplomatsForEquality London, signed by 37 countries. Together, with partners, we will continue tackling discrimination & promoting equality around the 🌎!🏳️🌈🏳️⚧️ Watch at: https://www.youtube.com/watch?v=AM0x8H6Z-54 or read at: https://culturecanada.co.uk/diplomats-for-equality

We are proud to sign the joint statement by #DiplomatsForEquality London which reaffirms our commitment to defend and advance the human rights of LGBTI+ persons.
Together, with partners, we will continue tackling discrimination & promoting equality around the world.