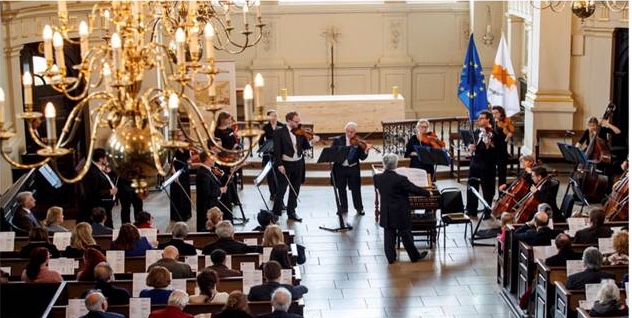 Attendance is free, no registration needed but early arrival is strongly recommended.

Established in 1998 and formerly known as Oxford Philomusica, the Oxford Philharmonic Orchestra occupies a unique position within the UK orchestral landscape. As an orchestra of the highest quality, the Oxford Philharmonic attracts some of the world’s greatest artists to appear in its series including Valery Gergiev, Anne-Sophie Mutter, Martha Argerich, András Schiff, Renée Fleming, Lang Lang, Janine Jansen, Yuri Temirkanov and Vladimir Ashkenazy.

Marios Papadopoulos is Founder and Artistic Director of the Oxford Philharmonic Orchestra. Enjoying an international career as a pianist and conductor, he has worked with many eminent musicians including Vladimir Ashkenazy, Anne-Sophie Mutter, Renée Fleming and Lang Lang. In 2018, Papadopoulos performed a mini-cycle of Mozart’s piano concertos in China with the Guangzhou Symphony Orchestra. The Oxford Philharmonic’s 2018-19 season sees him direct Stravinsky’s Concerto for Piano and Winds and in March 2019 he will conduct a new production of The Marriage of Figaro at the Greek National Opera. Papadopoulos’s recording catalogue includes his critically acclaimed Beethoven sonatas – which have been set on a level with Schnabel, Brendel, Barenboim, and Kempff (Daily Telegraph, Classic FM Magazine) – and works by Stravinsky (with the Royal Philharmonic Orchestra), Mozart, Mussorgsky, Franck and Shostakovich. He and Maxim Vengerov have recorded the complete Brahms violin sonatas and performed them at Vienna’s Musikverein in 2016. Papadopoulos was awarded an MBE in 2014 and is a Fellow by Special Election of Keble College, Oxford.

London-based opera singer Katerina Mina is a British spinto soprano, born in Cyprus. Katerina studied at the Guildhall School of Music & Drama, having received full scholarships from the City of London Corporation and the A. G. Leventis Foundation. Katerina also trained to become a concert pianist, but specialised her career in singing. As a result of her vocal talent, she was a prize-winner in the two International Singing Competitions she attended in her mid-twenties.

*Please note that all consular fees listed are in GBP and prices may vary slightly on the basis of the monthly exchange rate between Euro and GBP. All payments are made in cash.

CHECK OUT OUR CULTURAL PROGRAMME

⚠️ IMPORTANT NOTICE TO TRAVELLERS FROM CYPRUS TO ENGLAND ⚠️