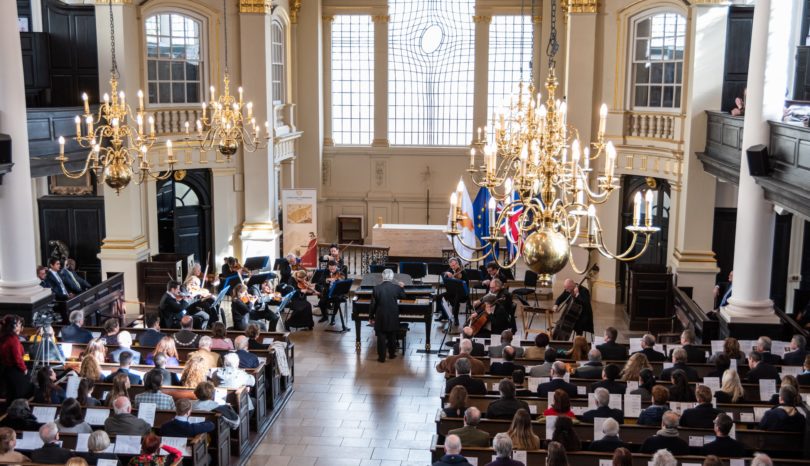 A hugely successful lunchtime concert took place on Tuesday 19 February at the historic St Martin in the Fields, in the heart of London, with the Oxford Philharmonic Orchestra, under the auspices of the High Commissioner of Cyprus in the UK, Mr. Euripides L. Evriviades. The concert, which was organised by the Cultural Section of the Cyprus High Commission and sponsored by the Cultural Services of the Cyprus Ministry of Education and Culture, was Cyprus’s second participation in the Embassy and Cultural Institute Series at St. Martin in the Fields. 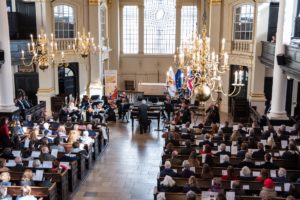 In his opening speech, Cyprus High Commissioner, Mr. Evriviades, praised the diachronic and ecumenical value of music as an international form of spiritual communication, a common language between people of different national, social and cultural identity. Referencing famous quotes from Plato, Shakespeare and Mozart, Mr Evriviades highlighted the soft yet solid power of culture as an agent of dialogue and exchange that builds bridges and enforces solidarity and peace. Mr. Evriviades thanked Dr Papadopoulos, founder and director of the Oxford Philharmonic, for kindly accepting the invitation, British Cypriot soprano Katerina Mina for her participation in the concert, the management of St. Martin in the Fields for their gracious hospitality, the Cyprus Minister of Education and Culture as well as the Director of the Cyprus Cultural Services for their generous support, and, finally, the staff of the High Commission for their hard work, and especially Dr Marios Psaras, Cultural Counsellor, who was the event’s main producer and coordinator.

Dozens of ambassadors, diplomats, parliamentarians, directors and representatives of cultural and charity organisations, distinguished academics and members of the Cypriot and Greek communities of London honoured the musical tribute to Cyprus with their presence at a crowded St Martin in the Fields. The enthusiastic audience enjoyed a high quality and especially curated programme, which included the unique “Overture to La Reine de Chypre” by French composer, Cypriot composer Georgios Andreou’s “Salamina” from his symphony “Imerologio Katastromatos”, and Mozart’s popular piano concert No. 27, K. 595.