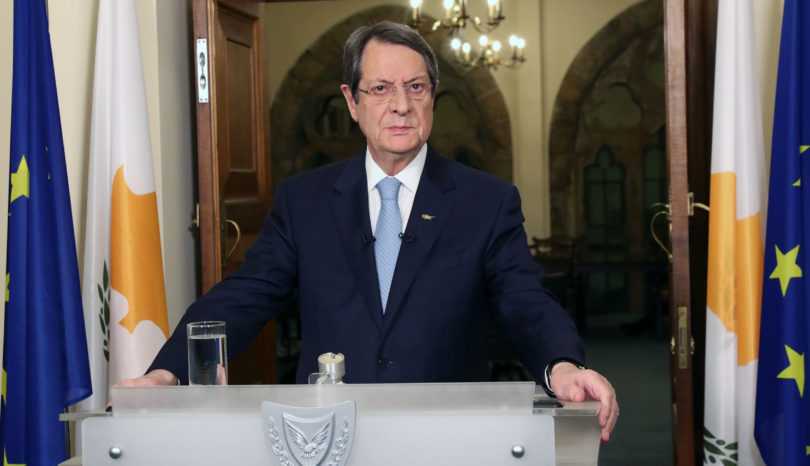 I am aware that the whole of humanity is living under unprecedented challenging conditions.

I am also aware that what concerns us all, is how we can effectively confront an unprecedented worldwide threat against the health or life, of our fellow citizens.

These days we are all hearing that humanity is threatened by an invisible enemy. And this is true.

What is even truer is that the more invisible the enemy is, the more visible its danger and terrifying consequences are, if we ignore the warnings and measures.

We are in a war. A war that does not call our children to arms in order to offer or take lives with weapons. A war that can be only won, if we remain in our shelters.

We took a series of harsh and strict measures; measures that have caused feelings of bitterness to some citizens, while they have upset the everyday life, overall.

Unfortunately, despite the measures, the sacrifices of thousands of employees, despite the sorrow parents experience as their children are still abroad, attitudes of indiscipline, lack of self-respect, of responsibility and solidarity towards our fellow citizens are observed.

Attitudes that expose the population overall, in lethal danger.

The scientific advisors of the Government rang the alarm. If there is not full compliance with the measures and if we do not react immediately with further limitations, the consequences will be asymmetrical for all citizens.

An out of control scattering of cases will lead to the collapse of the health system, which, however good structured, will not be able to respond to the growing demands.

I cannot imagine that we may be led to the incidents recorded in Italy or Spain, where doctors are forced to choose who will live and who will be left to die.

I wouldn’t wish any citizen to feel that the life of their children, their father or mother, their grandfather or grandmother will depend on circumstances resulting from the disobedience and indiscipline of an inconsiderate minority.

Taking into consideration what we all hope, never happens, the incidents recorded and the consultation with our scientific advisors, the inter-ministerial Committee which met today under my Presidency, decided to authorize the Minister of Health to publish a Decree with the following measures:

Under all circumstances, all persons moving about must carry identification and additional proof as to the purpose of their movement. Further details and the way of control will be announced tomorrow.

3. All retailers shall suspend their operations, except from the businesses that will be included in a relevant Decree that will be issued within the day by the Minister of Health.

5. Work on construction sites shall be terminated, except construction works relating to public utility projects and subject to the relevant permission from the Minister of Transport, Communications and Works.

6. It is prohibited for citizens to attend places of religious worship, such as churches, mosques and other places for prayer.

7. Prohibition of the custom of “lighting a bonfire” with immediate removal of timber or other materials already assembled for this purpose. The responsibility for implementing this ban lies with the local authorities in cooperation with the police.

I would like to make it clear that the State will be relentless towards those who will violate or have violated the state decrees issued to date.

In addition to any other criminal liability to offenders, an extrajudicial penalty of EUR 150 will be imposed.

In order to support the effort for the prevention and strengthening of the health system, the following have been decided:

1. Molecular testing for the detection of coronavirus is extended in Clinical, Biomedical or University Laboratories. Details will be provided in an announcement by the Ministry of Health.

2. It has been decided to utilize fourth or sixth year medical school graduates from Cyprus universities as well nursing school graduates, as part of their practical training.

3. Towards a more effective prevention and treatment, the number of public health clinics in all cities will be increased.

I know that the above additional measures will further affect the daily life of us all.

But I would also like you to think about those who, apart from their daily lives, also worry about their children studying abroad.

I wish to strongly stress that I empathise with them, but I also wish to assure them that the State will stand by them and their children.

This was, no doubt, a painful but necessary decision both for their own safety and health and for the entire population.

I assure them that as soon as conditions permit, the decision to gradually repatriate those who wish to return will be reassessed, with priority given to vulnerable groups.

Addressing the thousands of employees and employers, small and medium-size enterprises and self-employed who worry about the future, I convey the Government’s determination to provide substantial support.

Within days, with the assistance of the political forces which I warmly thank, a set of measures will be announced that will not only relieve but also create the prospect of a return to the pre-crisis situation shortly.

In closing, I wish to express my absolute belief that we shall succeed in this battle.

My faith and hope are sustained and strengthened daily by the front-line heroes, who at this moment are no others than the health professionals and others who assist in the State’s struggle against the visible dangers of an invisible, but not invincible, enemy.

Dear friends at the front-line, I express my heartfelt thanks and the thanks of the people as a whole for the work, perseverance and hope you give to us all.

Please, keep going. We are grateful.

Fellow citizens, stay at home, in your shelters, and we shall get through this.