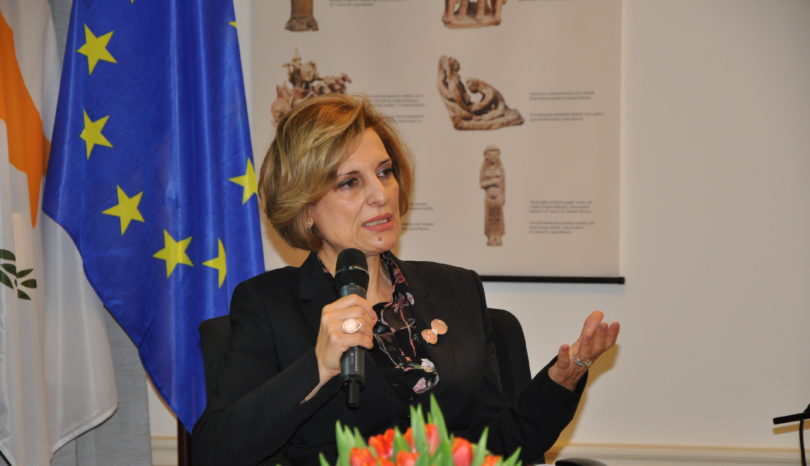 The Cyprus Museum: Past, Present and Future

Last Tuesday 5th of March, Dr Despina Pilides, Curator of Antiquities of the Department of Antiquities of Cyprus, gave an exciting lecture about the history and the future of the Cyprus Museum before a packed events hall at the High Commission of the Republic of Cyprus in the UK.

The event, which was co-organised by the Cyprus High Commission and UCL Institute of Archaeology, opened with a welcoming note by the Cultural Counsellor, Dr Marios Psaras, who outlined the longstanding collaboration between the High Commission and UCL Institute of Archaeology, and introduced the distinguished guest. In her illustrated lecture, Dr Pilides talked about the establishment of the Cyprus Museum in the late 19th and early 20th century, the evolution and extension of the museum’s building, exhibitions and collections through the years, as well as about the continuous excavating of archaeological treasures on the historical island of Cyprus. Finally, she presented the fascinating designs of the new Cyprus Museum, which is planned to open to the public in the mid-2020s. The lecture was followed by a Q&A discussion, moderated by Dr Psaras, during which Dr Pilides responded to various audience questions, raising important issues not only about the museum, but generally about Cypriot archaeology, including issues related to illicit trafficking of cultural objects and the preservation of archaeological monuments in the Turkish-occupied areas.

The event was attended by a truly diverse audience, which – among others – included senior curators from all major museums across the UK, diplomats, directors and representatives of cultural organisations, distinguished academics and researchers, and, of course, members of the Cypriot  community and diaspora of London, who share a genuine interest in Cypriot archaeology.

The lecture inaugurated the temporary photography exhibition at the events halls of the Cyprus High Commission, entitled “Archaeological Treasures of the Cyprus Museum”.

PLEASE NOTE THAT AS OF MONDAY 7TH FEBRUARY 2022 WE WILL ONLY BE ACCEPTING DEBIT/CREDIT CARD TRANSACTIONS FOR ALL CONSULAR SERVICES.

Fee for application for a non-impediment Certificate £29

Board of Deputies of British Jews@BoardofDeputies·
18 May

It is great to see this event between @NEPOMAK and @UJS_UK! There are unique bonds in the Eastern Mediterranean – may the relationship between 🇮🇱🇨🇾🇬🇷continue to grow from strength to strength. @CyprusInUK @GreeceinUK @IsraelinUK

🎥 Join @NEPOMAK UK & @UJS_UK for the screening of Exodus (1960) followed by a discussion, about the role #Cyprus played in the post #WW2 voyage of 600 #Holocaust Survivors

🙏 Thanks to UCL #Cypriot & #Hellenic Society for hosting the event