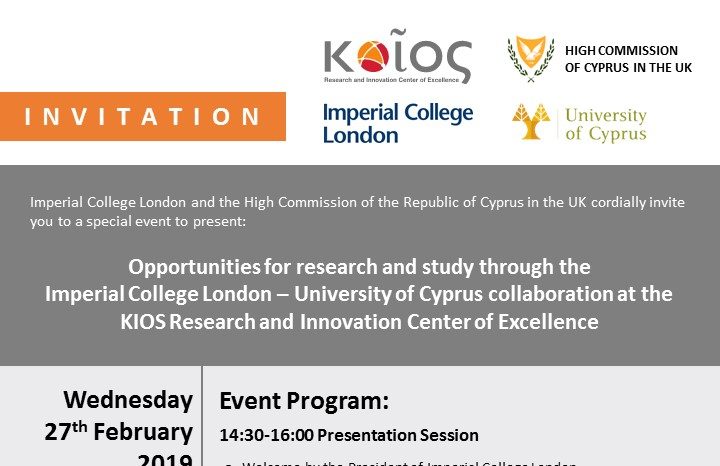 We are pleased to announce that an event showcasing the cooperation between KIOS Research and Innovation Center of Excellence of the University of Cyprus and Imperial College London will take place on 27 February, 14:30, at the South Kensington Campus of Imperial College. The event, which is open to the public, is under the auspices of the High Commissioner of Cyprus, Euripides. L. Evriviades.

Mr Evriviades said: “I am looking forward welcoming the team from KIOS Center of Excellence in London as well as joining the President of Imperial College, Professor Alice Gast, at the event. KIOS Center, through its collaboration with Imperal College London, has advanced the bilateral scientific and research cooperation between Cyprus and the UK. The event will showcase the work done thus far and will provide information about future projects such us the joint Masters degree that the University of Cyprus and Imperial College London will offer from September 2019 in Intelligent Critical Infrastructure Systems”

The Full programme of the event is herebelow:

Imperial College London and the High Commission of the Republic of Cyprus in the UK cordially invite you to a special event to present:

Opportunities for research and study through the

Imperial College London – University of Cyprus collaboration at the

The event is open to the public 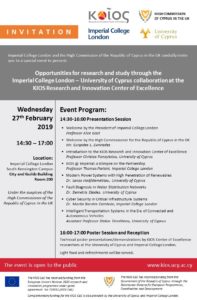